Okay, so he’s not a horse.
Christopher Marlow was born in late February 1564. He was a poet, play write, translator, and spy. He was one of the most influential and dangerous Elizabethan men. He died in questionable circumstances after visiting a pub in Deptford, London in 1593. Christopher Marlow McGuinness was born in early July 2003 in Streatley. He is a beautiful cream and grey tabby cat of unusual size.
He is also a cat of unusual tastes.

Christopher, who is also known as Kit, was my vicar’s cat’s son. She is also alive and living at the local pub. He was one of 6 kittens. 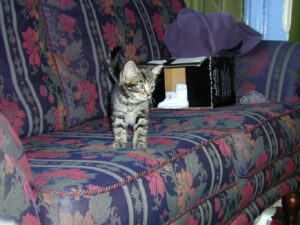 Shockingly, when we collected him and brought him home, Kit fit in a 2 slice toaster box – and there was tons of room. Our cat at the time was named Mushy and she was both unimpressed and slightly irritated by this new intrusion in her life. 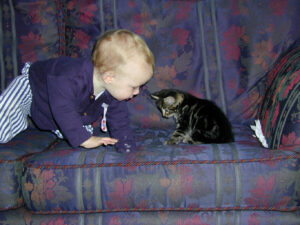 It had been bad enough that I had created these 2 small humans, but the presentation of a kitten was just too much. Mushy ignored Kit and sulked for about 2 weeks.
When it was clear that Kit (all Huw could say at that point was “Kit”), Mushy relented and decided in a most grudging manner to mother this forlorn kitten. She taught him to hunt – extremely well. 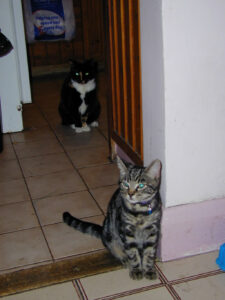 It is because Christopher is a very important part of Sunshine and we dread the day that he will no longer be with us. I often joke that it is Christopher who manages the Riding School. When clients arrive for their lessons, he is usually sitting on the desk (usually on the important paperwork I need). He will look at each rider as if to say, “If you want to ride, then you must pass my test of acceptance.” Fortunately, he has never turned anyone away!

Kit and Kimberly when he was 10 months old. His interest in computers started early.

Christopher’s paw prints decorate a variety of paperwork including last year’s License Application. Fortunately the Licensing Officer has known him for 5 years now and is accepting that any paperwork work from me has a 50/50 chance of being “signed” by Christopher. You may think that’s not terribly professional, and 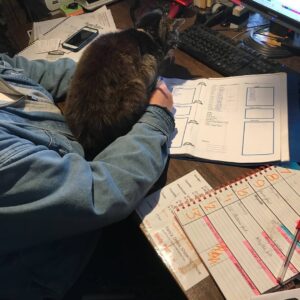 16 years later and it it hasn’t really changed

I suppose it might be viewed that way, but it is very hard to control Kit and do paperwork at the same time. Sometimes you just loose to him.
If you or or child have ever done a Stable Day or been a Handler at Sunshine, then you may have been given the “Christopher Talk” when it comes to bringing your lunch in. Although it is a standing joke, it is also very true: Kit Eats Everything. Let us go back to how Mushy taught him to beg. Mushy’s idea was that if there was food about, then it was hers. It didn’t matter if it was for a human, a cat, a dog or a fish – food belongs to Mushy.

She was not subtle about this. Because Mushy wasn’t subtle (she once tried to eat our Thanksgiving pumpkin pie and got her teeth caught in the aluminium tin plate, so she put her paws in the pie to free herself and burned her feet in the process), she was easy to catch when she was being “hungry”. Kit quickly learned that to achieve the State Of All Food Is Mine, he needed to be sly. 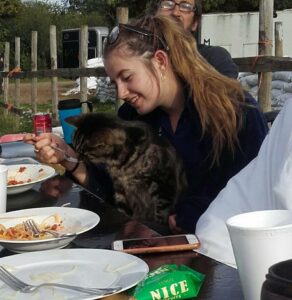 Izzy & Kit at Camp 2018. Yes that is Spaghetti Bolognese

Christopher mastered nonchalance. If you are eating, he will walk up to you and sit. He will look at you. He will show no interest in your food. You will look away, perhaps conversing with another human, but when you look back he is suddenly closer. He will look away as if uninterested in what you have. You will continue your conversation, not paying attention to what Kit is up to. You then find out that you are missing your food. Kit has it and is eating it about 10 feet away.
Christopher can (or could when he was younger) perform a movement we called “Dive Bombing”. It would start with his nonchalance. He would even be laying down so that you would not have a concern about him at all. Suddenly there would be a flash of grey and nothing from your table would be gone – except probably some bacon. 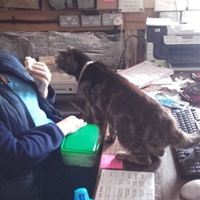 Caught in the act

He did this to us one Sunday morning when we had a family breakfast after Church. We were stunned. We thought this was a one off. We were wrong. No only has Kit dived in and taken bacon, but he has taken burgers, chicken and steak. An al-fresco meal means that we have to watch him like a hawk because he is one. This behaviour continues to this day as he tried it last Sunday. It was only because he has slowed down a bit with age that we were able to catch him in the nick of time or the Sunday roast would have been gone!
So we tell our clients to make sure that any food brought to the yard is in a “Cat Proof Container”. 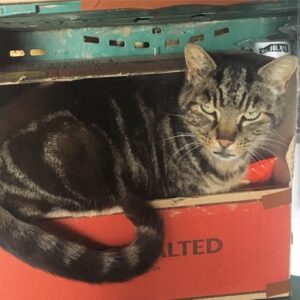 I warn them that just because it is in a cardboard box in the bottom of a rucksack does not mean it is safe. Christopher will open the rucksack, remove the contents, get the sandwich box and then open it. He likes a good challenge. He will then take a bit from both sides of a sandwich (just to see which one he prefers) before eating one and then the other. It doesn’t matter if it is Mum’s Home-made Special Spicy Something, he will eat it (he has dive bombed and eaten curry off my plate!). I have had numerous people who did not believe me come to complain that Kit has eaten their lunch. Last summer he, in spite of all warnings, ate at least 4 lunches I know of. If he had an opposable thumb, he would rule the world!
Christopher is still a curious cat. When we have our annual summer camps I have to remind the campers on a daily basis to make sure their tents are secure (they are also told to not bring food, please see above). Kit has been found in numerous tents enjoying the soft bedding and warmth (and the secret food stashes). Some of our campers love that he does this, however, there are some that don’t due to allergies. His ability to get into places where he doesn’t belong has meant that he has spent a few nights locked in various buildings. 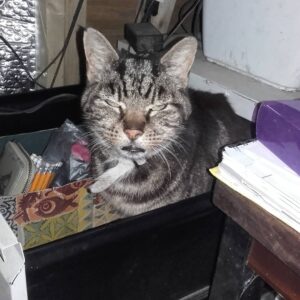 In The Office desk drawer

He has been locked in the Office at least 6 times, and twice in the tack room. He broke a window getting out of the Handler’s Den when we used to lock that. He has also surprised Simon a few times by sleeping on top of the hay in the hay barn. All this being said, he is not a fool and will only talk to the horses from outside their stables. I have not found him in one. Oddly, he knows where the feed room is too.
Besides my desk in the Office, Christopher has several places he likes to hang out. Obviously when the Handlers are here, he can be found in the Den. He also likes to lay on our horse figure, Sunshine, outside the office. 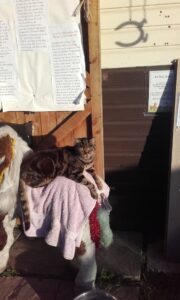 Currently he is laying on the table outside the Tuck Shop but I suspect he will move to the table in the gallery when we have lunch (for obvious reasons). In bad weather (i.e. winter), Christopher lays on the couch in the Staff House. He has been known to test everyone’s trust by laying in the middle of the car park as well. And before you ask, yes when he was younger he would lay on the roofs. This all means that a “Christopher Check” has to be done at the end of everyday so that he doesn’t end up where he shouldn’t be.
It was a bit of shock to him, much like it was to Mushy, that when he was 12 years old, two small kittens entered is life. He had seen his friend Drusilla die, and her sister Cassie was very depressed by it. He had been busy comforting Cassie (he actually cuddled her and gave her a bath! He still does that occasionally), when suddenly he had a pride to care for. Cassie did not take to the kittens – perhaps because she was grieving for Drusilla, so Kit took over. 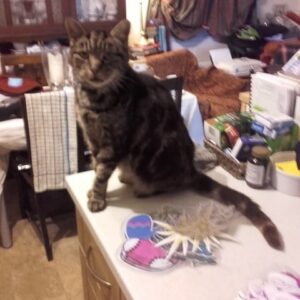 He loved and swatted them as necessary. He taught Xander and Lexie how to hunt (and they are very good! Very few mice and rats at Sunshine), how to beg (they aren’t as good as him but Xander is trying), and how to hold their territory. At 17 he is now caring for Cassie who has gone blind and keeping Ralf The Dog, who self-identifies as a cat, Xander and Lexie in line. He has a strange pride, but it is his pride. He is their King.
So when you come to Sunshine, don’t be surprised to be given a good look over by Christopher. If he likes you, then you will be expected to pet him. If he really likes you and you have sat down anywhere, then you will be expected to surrender your lap to him for however long he desires (our friend Margot was trapped over over an hour!), and if you have food… good luck?
Christopher is a very important part of who and what we are at Sunshine. This is why he has his own Horse Story. Someday he will cross the Rainbow Bridge and we will all be the poorer for it. He is an amazing individual who has made this riding school into his Kingdom. 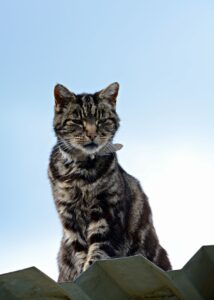 This post would not have been possible without the help from Chris Cole Photography, Andrew McGuinness who is a touch cat-mad with his photography and everyone who loves our Christopher!